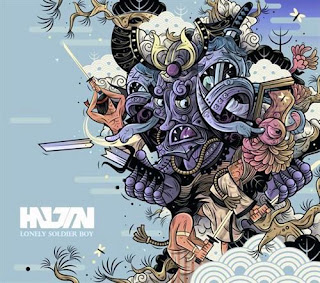 This is an old news, in Malaysia almost everyone knows about this but if you haven't heard it yet (especially in western country or even in Japan) you gotta know this. An Indie Malaysian Rock band "Hujan" remake the opening theme of Mospeada anime "Lonely Soldier Boy". You can hear the full song below.

The remake song also titled " Lonely Soldier Boy" is actually made years ago (through single demo release) until it was released in full album this year, probably the band didn't have the copyright of the song until recently. Or they just keep it for their second album. The song in this video is the demo version, hence the garage quality sound.

I didn't know the song was an anime song, although I have the mp3 of the Japanese version. I only heard it in an interview with "Hujan" on a newspaper. Here's the original Japanese OP and the OP with the new song.

The singer (and also composer) must be an anime fan. Hope he'll remake another classic anime song. Sailormoon or Dragonball maybe. You can check out Hujan's other songs, they're all awesome.
Dicatat oleh GreyToshiaki di 02:49