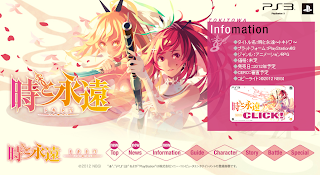 Namco Bandai recently announced a new JRPG titled Toki To Eien: Tokitowa (Time And Eternity) as they claimed to be a HD animation RPG for the PS3. Trailer below.

No longer a standard cell shading animation like the previous "Tales of" series, this time the sprites is actually a full 2D animation by Satelight, and the character design is by Vofan (from Monogatari series).

The technology is nothing new, as this method is previously used on classic PSX RPG. Although nowdays they can use a high quality sprite with full animation thanks to the more powerful modern game console. Tokitowa official site here.

The game is set to release later this year, only on PS3. By the way, Vofan is actually a Taiwanese.
Dicatat oleh GreyToshiaki di 04:34

The character design was pretty amazing the use of colors the shapes every thing is perfect. 2d animation video - VideoJeeves