The Tale Of The Princess Kaguya Review 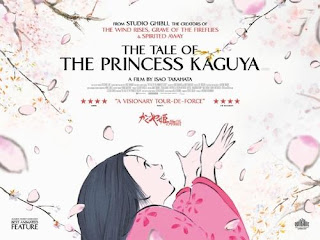 Let's review an anime movie that I just watched recently, The Tale of The Princess Kaguya (Kaguya Hime no Monogatari) by Studio Ghibli. I can say that, I shed manly tears watching this movie.

The movie is based on the Japanese folk tale "The Story of The Bamboo Cutter", which is similar to the Malaysian "Kisah Puteri Buluh Betong" (The Tale of Bamboo Princess) and "Hikayat Puteri Gunung Ledang" (Mount Ledang Princess). Well, back on the anime movie, it is directed by Isao Takahata who brings you the legendary manly tears anime, "Grave of the Fireflies". 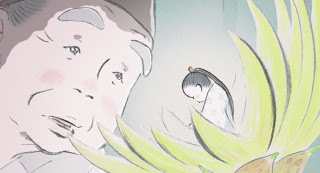 The movie starts as the bamboo cutter (let's call him Father) found a glowing bamboo shoots with a tiny girl inside. He takes the tiny girl home, thinking it as a blessing from Heaven, and showed it the his wife (let's call her Mother). And suddenly the tiny girl transformed into a regular sized baby. They decided to take care of the baby as their own daughter. 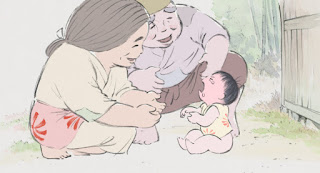 Living in a poor mountain village (or forest) the family lived happily. The other thing about the baby is she grew up really fast. Thus the other kids from the village called her Bamboo Shoots (or Little Bamboo, or in Japanese, Takenoko). She played with the other kids, learned about the nature, the animals, and met with Sutemaru, the big bro of the kids. 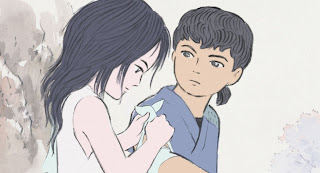 In the mean time, Father found another glowing bamboo, this time containing gold and luxury clothes. He tells his wife that all those are for Takenoko (the girl), and decided to use the gold to live in the city as a noble. A perfect fit for a princess. With a heavy heart, Takenoko leave the village without telling her friends and head to the city. 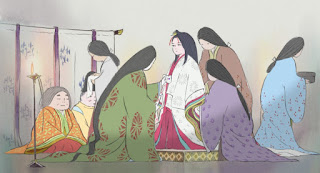 In the city, they lived in a huge Japanese mansion complete with servants. Takenoko even have a teacher to teach her a proper way of becoming a princess. Father invited a noble elder to give Takenoko a proper name. Thus they named her Princess Kaguya. The news quickly spread across the city about the beautiful Princess Kaguya, bringing all the men who wants to see her. But they are not allowed to since it's a customary for a princess to never show her face to any men. 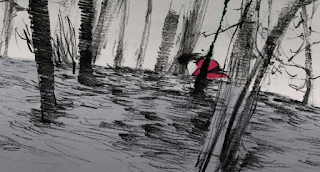 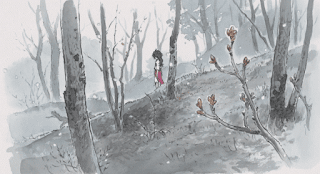 They demand to see Kaguya and ask proof if she's really that beautiful. They began mocking Kaguya, making her sad. She ran away from the house and head to her old mountain village. There she found out that her old house was being occupied by other family and all her friends have moved out. With nowhere to go, she wanders on a snowy plain until she's passed out. Saved by the faeries, she wakes up and back at her mansion house like nothing happened. She decided to live as a princess like her father wants. 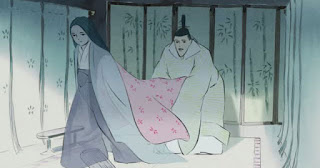 Years later, the news of her beauty attracts the nobles, even the Emperor himself. They came to her house asking to marry her. She rejects everyone of them, even the Emperor. Kaguya reveals to her parents that she originally came from the Moon. Once a resident of the Moon, she broke its laws, hoping to be exiled to Earth, so that she could experience mortal life. When the Emperor made his advances, she silently begged the Moon to help her. Having heard her prayer, the Moon will reclaim her during the next full moon. Kaguya confesses her attachment to Earth and her reluctance to leave. (yes, I copied that from wiki) 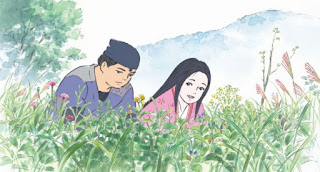 Father swears to protect Kaguya and build a fortress around the house complete with soldiers. Kaguya visited her old mountain village for the last time, she finds Sutemaru and confesses to him but it was all to late.

On the full moon, the moon delegates arrives and the Father's army fails to stop them. They pulled Kaguya away from Mother and offers Kaguya a robe that will erase her memories of Earth. Kaguya begs the moon attendant to grant her a last moment with her parents. 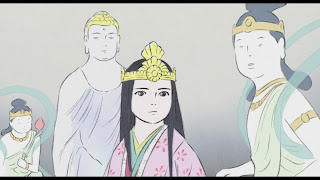 The attendant assures her that upon returning to the Moon, she will be free of Earth's impurities. Kaguya rebuffs her, saying that Earth is full of wonder and life. The attendant then drapes the robe around Kaguya, and she appears to forget about her life on Earth. The delegates ascends to the Moon, leaving Father and his wife distraught, as Kaguya looks back one last time with tears in her eyes. (copied again from wiki).

The animation is amazing. With the water brush art style, it's like an old Japanese drawing. A perfect fit for a Japanese folk tale. Kaguya is so beautiful, every time she expresses her feeling, it just grabs your heart. The music... well, I didn't pay attention much to the music (because the story and the art really amazes me) but it was composed by Joe Hisaishi of Studio Ghibli so I know it still great.

This is a must watch for those who likes tear jerker anime. Again all Studio Ghibli film are a must watch. It's not a happy ending (just like Grave of Fireflies) but it is a very good anime, you'll never find any other animation like this. Too bad they lose to Big Hero 6 at the Academy Awards. Damn those guys got brainwashed by 3Ds, Hiro x Tadashi shit.
Dicatat oleh GreyToshiaki di 00:03