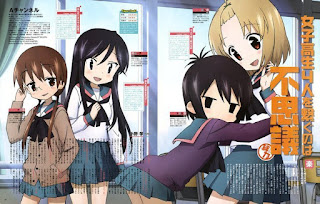 Based on 4 koma manga of the same name, this slice of life anime is about 4 high school girls doing what a normal school girls do. Like, really normal stuff. There's a bit of comedy in it but I'd say this is a fun to watch anime rather than a funny anime that you'll remember. Still funny here and there but not really laughable wahaha funny.


Its a good anime to watch if you're bored and have nothing else in your anime watchlist. But better watch it alone as it's not really an anime to laugh with your friends. Good anime but not really recommended.