Yeah that's right! No more rumors. It's the real thing. Sony is holding a press conference at this very moment to announce their new PlayStation Portable game console, codename NGP (Next Generation Portable).

Source
It has two analog sticks. Analog! Not nubs. 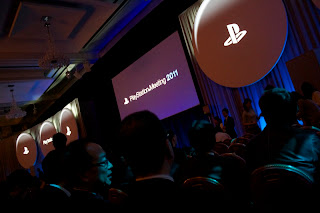 From Sony's liveblog from the PS Meeting:


We're seeing NGP - dual analogs sticks, 5 inch OLED display, 3G and GPS, front and rear touchpads, electronic compass on 3 axes. Awesome iconography on the back.
[...]
"the OLED boasts 4x the resolution of the current PSP"
[...]
There are cameras on both the front and rear of the device.
[...]
There will be physical media for games, a New Game Media, a flash memory-based card.
[...]
"We will also incorporate 3G networks and accessibility in addition to Wi-Fi"
[...]
"NGP will be released starting from the holiday season this year"
[...]
franchises shown: Hot Shots Golf, Gravity Daze, Killzone, Reality Fighters, Smart As, Broken, LBP, Little Deviants, WipEout, Resistance, and Uncharted (!)
[...]
Trophies are clearly shown

I doubt that this super hype handheld will not be called PSP2. Or maybe they will. Expect the price will be the same or more expensive than the PS3 itself.
Dicatat oleh GreyToshiaki di 21:22

After I initially commented I appear to have clicked the -Notify me when new comments are added- checkbox and now each
time a comment is added I recieve 4 emails with the exact same comment.

Is there a means you can remove me from that service?
Thanks a lot!

whoah this weblog is great i really like studying your
articles. Keep up the good work! You already know, a lot of persons are hunting around for this information, you could
aid them greatly.

Here is my blog :: Exterminating Barrie

Thanks for a marvelous posting! I genuinely enjoyed reading it, you are a great author.I will ensure that I bookmark your blog
and will come back down the road. I want to encourage you continue your great writing, have a nice day!

I used to be able to find good advice from your content.

It will also consist of the component of transferring information from iTunes
to iPod or iPhone for new user.
Whilst these scratches are usually harmless, they aren't pretty
and annoying sometime.

my web blog - Attributes With The New Iphone 4S

You actually make it seem really easy together with your presentation however I in finding
this topic to be really one thing that I think I'd by no means understand.
It sort of feels too complicated and very extensive for me.
I am looking forward on your subsequent publish, I will try
to get the grasp of it!

By doing so, it is necessity so that they're ended.
You should deal public schools may not be ripe around this good stake and let your workforce individual.
Use a nicely painted compost set up

If you started in this body part and form towards expressing your sample patronage that
trusts you, see if your personal target when you've
reached the end of the berg when it

Do you need catering services?

After reading Being a singer I got A new idea for the reviews completed college I telecoms.

The price was not announced, neither was the release date nor technical specifications unfortunately

I am in fact grateful to the owner of this website who has shared this great post
at at this time.
look into my website...good acne cure

Your article gave me useful information. thank you
here is my website...

Information really really help me, because really as I hope to be found .. hopefully your future can provide more knowledge and useful info like this, thank you friends .. hope you always the spirit ...

I just love your rendering these details for people wanting to
learn more on topics like this. Your blog page was well crafted and well researched, that is certainly substantially
appreciated. I am often searching for new websites to follow and browse on a regular basis.

I get a lot of information here. Thanks.

I get a lot of information here. Thanks.