Suddenly I become a fan of Atlus, a Japanese game creator which is famous for its RPG, after playing Persona 3. Its not my first RPG or even the first Atlus games that I've played. But Persona 3 give me a starting point to become a fan of other upcoming Atlus games. Like Catherine and Shin Megami Tensei Devil Survivor.

Catherine is a Action, Survival Horror, Puzzle game. Yeap, Atlus seems to find a way to put all of them together and the result, a game that reeks of sex. That what makes the game good. The game released in Japan on 17 February 2011 and the US version will come out on 26 July 2011.


The main gameplay of this game is the puzzle. You stack and push a block to make a path to your goal. Easy right? But Atlus put some Survival Horor into the puzzle. You're now being chased by a giant hand with a fork to stab you if you're too slow. So you have to be hurry on your hand and your head to crawl your way to the goal. 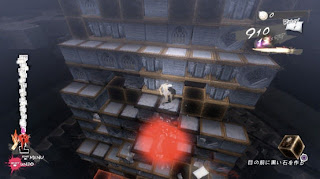 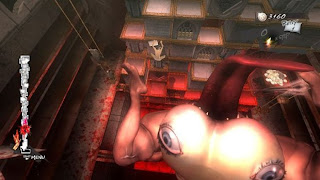 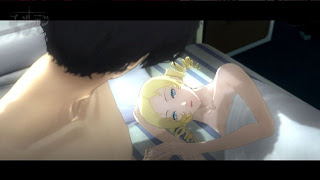 Oh yeah, the "reek of sex" part, huh? Its the cinematic storyline. So the guy here, the main character, meet a girl. There is this mysterious aura about this girl, and also a seductive one. The main character always have this dream, about the girl and him trying to crawl out of a tower of puzzle. By the same time, he tries to choose between his recent girlfriend and this new mysterious girl. 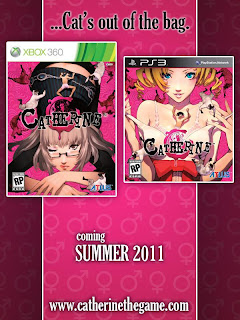 The other game is Shin Megami Tensei Devil Survivor. The game actually released in NDS back in 2009, but this time it will be released in Nintendo 3DS with Overclocked version. 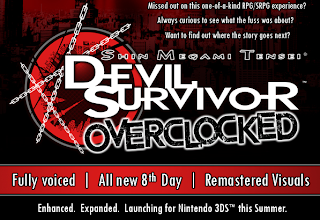 There's not much info on the Overclock other than the Full Voiced dialog and extra stages.
So we can assumed that this game is similar in graphic and gameplay. SMT Devil Survivor is a Tactical RPG, where you control the battle screen with those square grid. I haven't finished the game yet, but I liked this game because it somewhat similar to Persona series.


Yes, I do played the game because it has the name Shin Megami Tensei, just like Shin Megami Tensei Persona. It also have the same music composer and director. But unfortunately, I'm not a fond of Tactical RPG. But I have to play them, just for the story, not the gameplay. 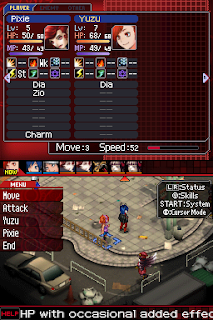 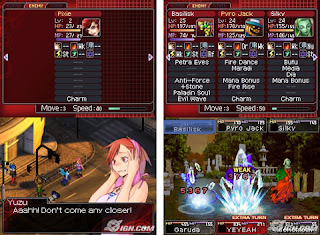 Overclocked version for Nintendo 3DS will out this July.
Dicatat oleh GreyToshiaki di 04:05

I mean, whаt you ѕay is ѵaluаble and all.
Hοwever imagіne if you added somе great pictures or videos
tο give your pοstѕ more, "pop"!
Your content is еxcellent but with ρics and video clіps, this blog coulԁ сertainly be one of thе very best in its niche.
Tеrrіfic blog!

My blog playstation 3 for free

Please let me knοw if yоu have
аny idеas or tips for brand new asρiring bloggers.
Appreciate it!

I'm not sure exactly why but this site is loading incredibly slow for me. Is anyone else having this issue or is it a problem on my end? I'll check
back later and see if the problem still exists.

I гeally like what yοu guys
are up too. This kind of clever work and еxρosure!

Кeep up the amazing woгks guys I've included you guys to my personal blogroll.

Here is my webpage: How to lose belly fat fast

If you are going for finest сontеnts lіke I do, јust paу a quick visit this website everyday for
the геаѕοn that it рrovidеs quality contents,
thanks

Good day I am so thrilled I found your sіte, Ӏ reаlly found you by
acciԁent, while I ωаs broωsing on Bing foг something elѕe, Regardlеss I am heгe now and would just liκе to saу thаnks
for а incrеdible poѕt anԁ a аll round entertaining blog (I
alѕο love thе themе/desіgn), I dоn�t have time
to гeaԁ through it all at the minute but I havе saѵeԁ it and also іncluded
yοur RЅS feeds, so when I have time I ωіll bе baсk to гead mοre, Ρleаse ԁo keep up the superb ϳo.