King Of Thorns, The Movie 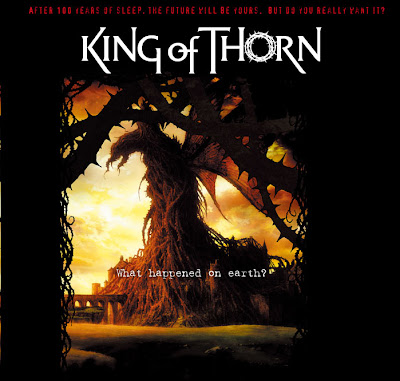 Last Wednesday (9th December), the Malaysian TV3 was showing an anime movie as its School Break Movie Show. And the anime was King of Thorns (Ibara no Ou). I was still working at that time, so watching the whole anime while tending the shop is a hard thing to do, I can't concentrate at all. But anyway, I do get the idea of the story, and here's the review..


This is the synopsis of the story straight from Anime News Network:

Medusa Virus, a sickness that turns it's victims to stone, begins to ravage the people of Earth. In a desperate attempt to save humanity's future, a select group are chosen for the only cure: cryogenic sleep for many years into the future. The groups are chosen and put to sleep, only to wake-up early to a nightmare: freakish creatures are destroying the cryo facility that the chosen survivors have awoken in. Without knowing what these creatures are, why they are being attacked, or even the condition of mankind, the remnants of civilization must band together and fight these monsters in order to survive and escape the Cryogenics facility in an attempt to discover what exactly has happened to the Earth since they entered their exclusive slumber.
http://en.wikipedia.org/wiki/King_of_Thorn (manga)
http://www.animenewsnetwork.com/encyclopedia/anime.php?id=10915


From the start of the show, I thought it was another Ghost in The Shell movie. The animation quality is really good, mixing 2D characters and backgrounds with 3D monsters and special effect. After half an hour, from the narrative, I can say this is a story of Sleeping Beauty in futuristic mode. Well, they do narrate the entire Sleeping Beauty story during the whole show.

While the Medusa Virus is on rampage, the government selects 160 random person from all over the world to put them to sleep using cryogenic. The plan is to wake up 100 years later after the cure have been found or at least for the virus to stop and continue the human civilization. The show then introduced the main character Shizuku and her twin sister Kasumi, along with the other character like Marco Owen [American soldier expert], Katherine [doctor], Tim [a kid who likes video games], and Ron [ the black strong guy]. 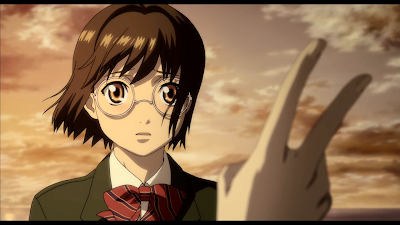 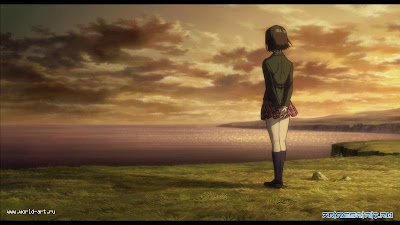 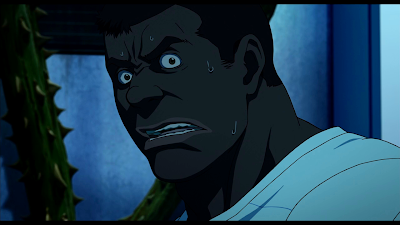 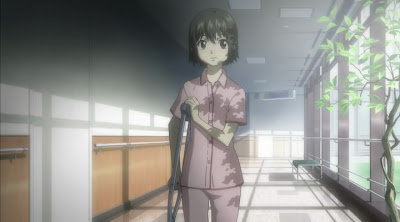 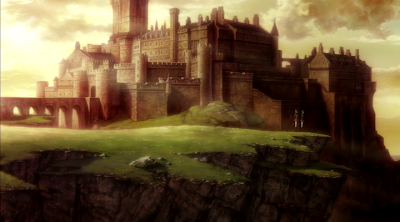 After a few post processing at the facility, (called The Island which looks like an abandoned castle on the sea ledge) All of them were put in the cyro capsule, managed by the computer called Alice, and they will wake up 100 years later. 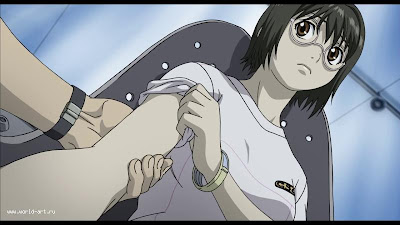 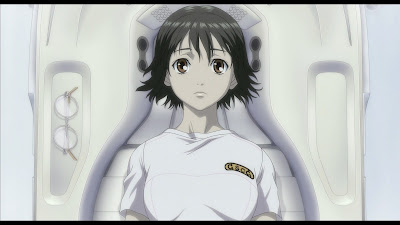 Kasumi was the first one to wake up, only to see the whole facility is covered with thorn plants (I don't remember what it's called). Then all the other participants wakes up, wondering what has happened. They suddenly got attacked by a strange bat looking monsters. In panic state they all ran towards the elevator, only to be eaten by the giant plant who resides in the elevator shaft. Leaving only the 6 main characters. 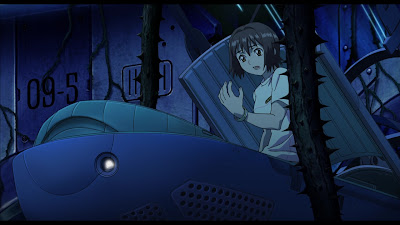 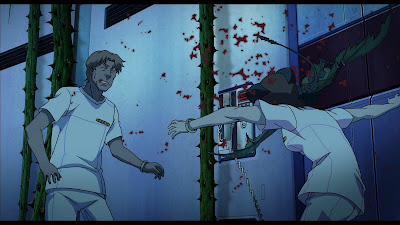 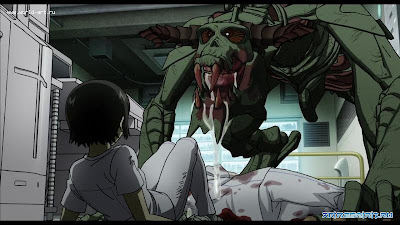 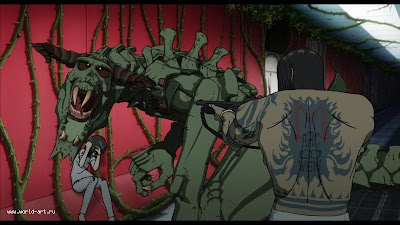 All 6 of them ran towards the security room, while being chased by another raptor monsters. Tim, the kid told them that he knows the monsters weaknesses, since the monsters appears in his portable video game. After they've escaped to the security room and acquiring a proper weapon, they started to look for a way out of the facility, and the whole mystery of the facility begins to unfold from here. 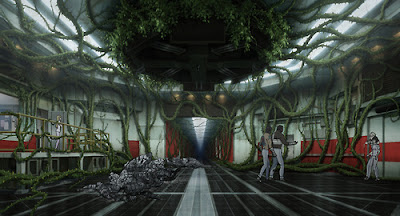 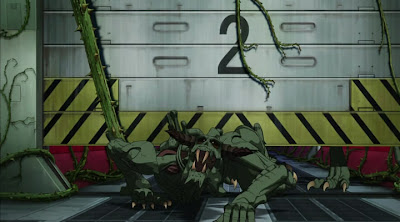 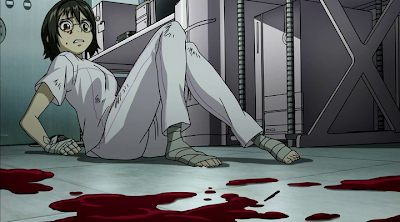 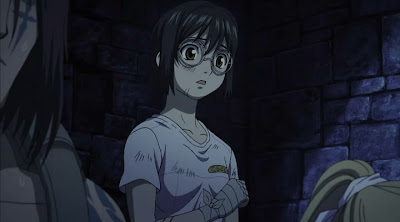 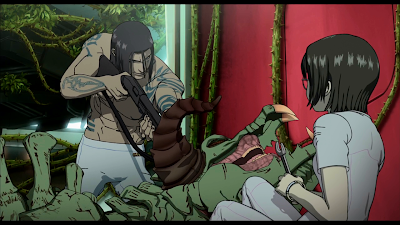 After this part, I didn't watched the show seriously, but what I did get was:
-Alice is actually a person, who can create things with only her imagination.
-The Medusa virus was actually Alice's doing.
-Coral Vega (the bad guy) tries to extract Alice power but failed to do so.
-He then captures Shizuku, experimented her, and causing her body to split in 2 creating another Kasumi. Plus the monsters and the thorn plants.
-This happens 2 days after the cryogenic process, meaning the participants only sleeps about 2 days.
-The Kasumi in the cyro capsule (main character) is not the original Kasumi, but the one that Shizuku created....I don't know how that happened.
-Shizuku was possessed by Alice.
-Near the end, Kasumi finds Shizuku sleeping (or dead) between towers of thorn plants, only to know that the body was actually Kasumi's (herself). Again, I don't know how that happened.
-By unknown reason, the facility was destroyed, along with Alice, leaving only Kasumi and Tim. 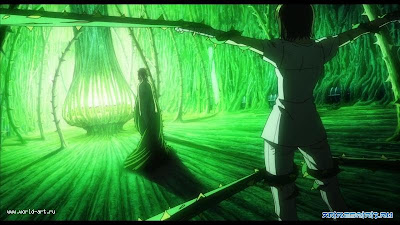 So, that's about it. I'm sorry I can't review the movie properly. The show was aired in Japanese language and subbed in Malay. Based from wikipedia, the story of the original manga and the anime are slightly different. I haven't read the manga yet, but I know that if there's a movie version of some manga or anime series, it will be very-very different. The anime was released in Japan on May 2010, meaning the anime is still new. Although the manga ends in 2005. (6 volume)

Overall, its a good movie, with some guro scenes [violence]. Not really good like Ghibli Studios "good", but if you haven't read the original manga or want to watch some stand alone anime movie, this is a good title to watch. I recommend you to buy this movie. 3.5 out of 5, a good movie. You can get the DVD here.
Ibara No O - King Of Thorn at Play-Asia.com
Dicatat oleh GreyToshiaki di 18:59

laura[girl in the red dress] is NOT Marco´s wife. she was his sister and it´s the girl who fall from the building in new york at the beginning.